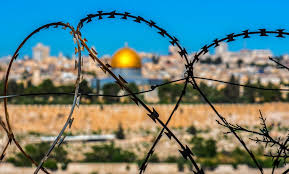 John Steinbeck would roll over in his grave. The 1962 Nobel Prize laureate in Literature wrote a lot about men doing what ‘a man’s gotta do’, like in his 1937 classic Of Mice & Men (and please note modern parallels). Lenny Small is a big brute, albeit a mentally-challenged one. (Brain-washed mobs are equally dumb and dangerous). His name is intentionally ironic. (I’ll leave that parallel up to you).

George Milton knows there’s been enough trouble already, as Lenny has already killed mice and the wife of Curley, the boss’s son. George realizes that Lenny is a “mazik”, and to prevent more trouble, George knows he has to take him out: “A guy got to sometimes” Steinbeck writes on the last page.

To Steinbeck and most of the free world, this is a self-evident truth that goes seamlessly along with inalienable rights based on the axiom that Man is endowed with an innate sense of justice. That seems to be true for all except Israel – for us there’s always the double standard.

The necessity of sufficient security measures should be a given. A basic sense of justice should agree. That two of our police and three Shabbes-observing Jews are five people too many to prove that the present measures and “status quo” are insufficient in the end are obvious to only us. This whole issue and the call for an equality-earned Jewish Day of Rage comprise most of our Am’s current post headlines.

There are also pics of that grinning, smirking 19 y/o Amalekite monster – and he is a monster – who will now get $3,120/month for life from the monster PA terrorist group for murdering the three Solomon family members on Shabbat. Knowing this and seeing the pics should get us angry. It should work up a mad raging lather!

But, as men – not as mice, nor as monsters – we need to know how to rage and to whom to direct our rage. Fly off a handle in a murderous monster rage like the Amalekites? No. We are a holy people, instructed by our Sages: “In a place where there are no men, strive to be a man” (Pirkei Avot 2: 6). And, to whom can we, or should we, direct our rage? The US, like the rest of the world, has proved not helpful. Appeal to mousy Ali Bibi to the west of the Jordan River or Ali Baba to the east? No. Both are incompetent “leaders” of their respective people. Maybe to Lewis Carroll’s Tweedledum and Tweedledee? Contrariwise!

Yes, back to literature. The best-laid plans of mice and men is a phrase coined into and now part of the English (or American) language. It’s the “random element”, the true deciding factor that can topple all of man’s best laid plans. The Jewish equivalent is the saying Man plans and Hashem laughs. At least the Jewish version clarifies who’s working the strings behind the scenes – because it sure isn’t the Wizard of Oz. Amalek also, by definition, tries to make all events and things look like chance. To be sure, it is Hashem. It is only Hashem. Knowing this and truly believing and living according to this is the essence of being a Jew.

We have been in the night of galut long enough. As Dylan Thomas wrote: “Do not go gentle into that good night. Rage, rage against the dying of the light.” Our rage must be channeled and directed to the ONLY ONE pulling the strings. And, Tisha B’Av is our Day of Rage!

More than the Grapes of Wrath of Esau Uncle Sam, we need to fear the charon af, the “Nose” Wrath of Abba. East, west, north, south – just as our Sages warned us of this time, “be’ikvot Meshicha”, there is truly no one to turn to and no one we can rely and lean on, but our Father in Heaven (Mishna end of Tractate Sota).

As a proud member of Am Yisrael, I assert that there’s an equal if not more powerful and decisive “hard currency” than brute force and raw power that gets the results and tames the unruly Arab “hands” in our Wild Wild Middle East (the main thrust of the posts circulating now) – and that is the “voice of Jacob” (Bresheet 27:23). This ingrained belief is also what differentiates Am Yisrael from the Erev Rav – our faith and voice.

Don’t get me wrong. Metal detectors and security systems are important. Action and hishtadlut are important – we live in Olam HaAssiya, the World of Action. But the best laid security measures, like the best laid plans…are of mice and men. Hashem just might be laughing, because with all the discussions about bigger and better, or more or less, camera and metal detectors, we continue to forget (or hopefully not) that the greatest of all surveillance systems and most powerful and important operations center – is Hashem.

The 9th of Av is a metaphysically “hot” day, prone to breaking and destroying things. It is the very day of the Sin of the Spies, of the destruction of the First and Second Temples, and the same date that the Romans massacred the Bar Kochba rebels. This is very day in 1290 that Jews were expelled from England, as it is the same date of the deadline beginning the Spanish expulsion of Jews in 1492. It also is the very day in 1914 that Germany declared war on Russia, effectively beginning WWI, which lingered on and into WWII and the Holocaust.

But guess what? We have the power to utilize this energy of Tisha B’Av to “break the destruction”, to render the Heavens, and to end this galut. HaKol Kol Yaacov, the voice is the voice of Jacob – our prayer and our voice have the power to end this dead-end and impasse we’ve come to with no real leaders. This Monday starting at sundown we need to rage – rattle and split the Heavens – to save us!

From the title, you’ve already expected a pep talk. So now, I turn to Team Am Yisrael and say, Come on, Team, let’s do it this time! Let’s knock it out of the park! Let em have it & show em what we’ve got! Hold nothing back! Enough! We’ve had enough! We absolutely cannot take this long and bitter galut anymore!

May this be the last 9th of Av we need to fast & mourn!