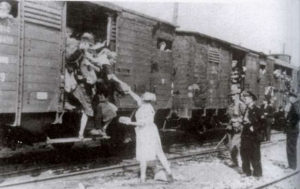 Actually, it’s not what Uris “would have said” but what he actually did write.

The recent pending amendment to the Polish act on the Institute of National Remembrance by law by the Parliament of Poland, should the President of Poland sign it into law, would bring with it the possibility of a government-imposed fine or up to a three-year term of imprisonment to persons, both within and outside of Poland, who “ascribe to the Polish People or to the Polish state responsibility or co-responsibility for the Nazi crimes committed by the Third Reich” (from the February 1 statement by the Committee on Antisemitism and Holocaust Denial of the International Holocaust Remembrance Alliance).

With this still in the news, it just might be high time to pull your copy off the shelf in your library and reread Uris’s iconic and mega-bestselling 1961 novel on the Holocaust and the Warsaw Ghetto Uprising in particular – namely Mila 18 – to know why the pending Polish amendment is WRONG.

Here are a few quotes from Mila 18:

*Andrei to Roman in Part 3, chapter 12: “This [Poland] is the only corner of the world where extermination camps could exist. The German army doesn’t have enough divisions to guard against the people if they tried it in London or Paris or New York. Only in your goddamned Warsaw.” (Author: Leon Uris)

*Roman: “Ninety per cent of the [Polish] peasants would turn in a Jew for a bottle of vodka” (ditto). (Author: Leon Uris)

*Journalist Christopher de Monti writes the final entry in the “Brandel jourmals” at the very end of Mila 18 (Part 4, chapter 24): “What of the [Nazi] murderers?…No doubt their ilk will die in bed of old age, for the world is a forgiving world and they will say they were merely following orders. And the world will say…let us forget the past. Let bygones be bygones…Already we hear the verbal gymnastics of the Polish government in exile spouting theories of apologetics in behalf of their people who committed the conspiracy of silence.” (Author: Leon Uris)