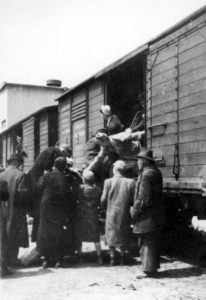 When you read accusations that Israel is so-called “illegally occupying”, demand to know “illegal” by whose stupid law that’s defined.

The British “White Paper” of 1939 ordered the ports of British-occupying Palestine closed and “warned any Jews who might try to evade extermination at Nazi hands by sneaking into the Holy Land, that they would be treated as enemies of the Crown.” That is, any attempt to survive by escaping sure death at the hands of the Nazis – any Jewish attempt to save one’s own life! – by trying to return to their God-given homeland, by British law, was considered “illegal”.

In his 1961 best-seller on the Warsaw Ghetto Uprising, Leon Uris tries to explain the warped “logic” of the Nazis law as follows:
“[T]he Germans go to fantastic trouble to make themselves truly believe what they are saying. The verbal acrobatics are played out. Basis: In order to live in the ghetto, one must break the law. Therefore, everyone who is alive is a criminal in the German lexicon and can legally be executed. Incredible?
Here are some of their ‘proofs’:
They will go to great trouble to hold a kangaroo court trial, documented fully, to punish a common thief or vagrant. They will make an exhaustive investigation over a single typhus death to ‘prove’ their interest in human lives…
They allowed a few schools to reopen to ‘prove’ German love of freedom of education. Because we [the Jews of the Warsaw Ghetto] are unable to support many schools, have no textbooks, fuel, facilities, and the children are too sick and weak to attend, this ‘proves’ the sub-human Jews will not educate their children…
More ‘proof’ of the German case: Special SS film units have entered the ghetto. They film the delousing sheds. Have you ever seen a man fifty pounds underweight, freezing cold, and hairless? German narration shows this is a ‘sub-human’ disease carrier, and the appearance portrays just that.
Bearded rabbis are forced to pose in the warehouses at Transferstelle beside tons of food while the narration ‘proves’ how the Gestapo located secret caches which these old bearded Jews hoarded while their neighbors starved” (Mila 18, Part II, Chapter 30, pp. 280-281).

THE Law that vetoes all and any claims of illegality of Israel’s existence – of Jewish survival! – is God’s, in His Law of the Universe, His Universe, His Earth, His decision:

Am Yisrael lives in Eretz Yisrael by the right given by God in His ultimate Law, the Torah.

All goyim who make up laws to say otherwise, can go take a hike.  Am Yisrael Chai!!!