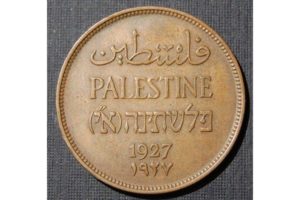 See, if Abbas is claiming to be a pagan infidel, as the Canaanites were, then… Well, maybe his Muslim buddies need to…you know what they do to infidels…behead him, right?

But, if he’s running on a Muslim platform ticket, then Abbas just needs to learn a little Quran. So, hey! I’m here to help!

There are 110 verses in chapter 17, “al-Isra”, of the Quran – yes, all about Israel! – that recount the story of the “Children of Israel”. It is this same chapter that is inscribed in calligraphy over the niche in the southernmost building of the Aqsa Mosque in Jerusalem. This includes the revelation and receiving of the Torah on Mount Sinai, Am Yisrael’s struggle and subsequent liberation from Pharaoh’s enslavement, the golden calf, the splitting of the Red Sea, etc.

“And certainly We (Allah/God) gave the Book and the wisdom and the prophecy to the children of Israel…and We made them excel the nations” (Quran 45.16).

Professor Khaleed Mohammed (Islamic Law scholar of the San Diego State University) teaches that the medieval exegetes of the Quran, in particular Sura 5.21, mean that Israel belongs to the Jews. And he translates the verse thus –

“[Moses said]: O my people! Enter the Holy Land which God has written for you, and do not turn tail, otherwise you will be losers.”

Professor Mohammed then explains that the word “written” means that this is the final word from God on the subject.
Jordanian Quranic scholar Sheikh Ahmed Al-Adwan has also stated that according to the Quran, the Land of Israel is promised to the Jews.

Egyptian scholar Dr. Tawfik Hamid, quoting Quran 17:104, explains that God gave the Israelites the Land of Israel as their Promised Land and that, as per Quran 26:59, the Promised Land is the permanent inheritance for the Israelites. “No Muslim has the right to interfere with the gathering of the Jews in Israel, as this is the will of God Himself.”

Sheikh Agbdul Hadi Massimo Palazzi (leader of the Italian Muslim Assembly and the Khalifah for Europe of the Qadiri Sufi Order) is particularly noted for having stated that the Quran says that the Land of Israel is the homeland of the Jewish people, and that God Himself gave that land to them as heritage and ordered them to live therein. “It also announces that – before the end of the time – the Jewish people will come from many different countries to retake possession of that heritage of theirs. Whoever denies this actually denies the Quran itself. If he is not a scholar, and in good faith believes what other people say about this issue, he is an ignorant Muslim. If, on the contrary, he is informed about what the Quran says and openly opposes it, he ceases to be a Muslim.”

So, either way – infidel or Muslim – Abbas, you’ve dug yourself a hole!