Imagine being invited to a party thrown by a community to celebrate a pedophile and child rapist. No need to imagine that scenario. Thanks to the good people at Jewish Community Watch and, specifically, thanks to Shana Aaronson (from JCW), we have the pictures to prove it.

Before going off to prison after having been found guilty, this pedophile was feted. There was food in abundance; smiles; certainly divrei Torah and words of bracha. Certainly the party would be replete with words of encouragement to the convicted pedophile. 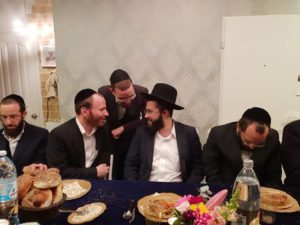 As Ms. Aaronson says in her Facebook post: “[in this picture] Yisrael Draiman [in the hat] a chareidi askan who was recently convicted of numerous sex crimes against four female minors. To be abundantly clear, he was charged with tens of counts of molestation, indecent sexual acts, and sodomy of four little girls each around 12 years old. The man to his right is Yanky Kanievsky, grandson of Reb Chaim Kanievsky. This wouldn’t be exceptionally noteworthy except that Yanky is the leading gabbai of Reb Chaim, which means he is one of those who decides who is allowed in, who gets seen and heard, and whose letters gets signed by Reb Chaim. Which means, he is arguably one of the most powerful singular individuals in chareidi litvish Jewry today “

Let’s get one thing straight–and I have said this countless times in the past but it bears restating–the ones who sweep pedophile offences under the rug; the rabbis who turn a blind eye; the ones who tell people to be silent when they could have helped–all of them are as guilty as the abuser himself. You could have prevented further victims and you didn’t? Then every single victim after that is on your head, as well.

That is bad enough…but to make a party replete with all the trimmings for a pedophile, a child rapist a man who preyed on young girls, well, that is the height of despicable action. Just when you thought you had seen it all, this really is mind-blowing.

Always, when I write a post that deals with child sex abuse, invariably, there are messages that I receive accusing me of indicting an entire sect of people, ie, Haredim. So, as always in the past, let me make it clear: I don’t care what you wear on your head, I don’t care what shul you pray at; I don’t care how long you wait to end Shabbat. If you are Dati-Leumi, Haredi, Litvish, Yeshivish, or not religious at all….NEVER EVER EVER EVER  are you on the right side when you protect a pedophile or fete him in any way shape or form.  It is not an indictment of Haredim. It is an indictment of ANYONE who dares to side with the perpetrator and not the victim.

So, to those who attended this party and to all who aid and abet pedophiles I say: You can dress yourself up as being religious, you can sway all you want when you daven, you can fill your day with words of Torah, but–bottom line–it is meaningless when you transgress many of the Torah’s laws. You all will  need to answer for that one day before Hashem.

In the meantime, thank G-d for organizations like Jewish Community Watch. It is by them being vigilant and bringing to light these offenders and offenses that this issue can remain on the front burner, till one day there will be enough leaders in ALL communities to stand up and say that enough is enough.

Till then, it will be business as usual. Here’s to praying that that business shuts down in the very near future.