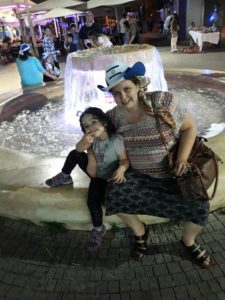 Heather Stoltz recently published an article titled “Being Jewish kind of sucks now that I’m a mom.” In the article, she claims that she is increasingly becoming detached from her synagogue due to the fact that her children make too much noise in order to remain in services.

As a mother to 3 small children, one being age 3, one being a year and a half, and the youngest being but 2 and half months old, I would like to respond by saying that for me, the mitzvah of motherhood did not push me away from Judaism.  If anything, being a mother made me practice Judaism much more than I did prior to motherhood.

However, in order to create a happy spiritual home for your children, sometimes you need to pray outside of your comfort zone for the sake of your children.  This is why even though my husband is half Iraqi and half Moroccan and my paternal grandfather was a Sephardic Jew from Ioannina, Greece who immigrated to America, we both pray at an Ashkenazi Chabad synagogue.

Yes, we both miss hearing the community singing from Song of Songs on Friday night and hearing quotes from the Shulchan Aruch.  Yes, we prefer the Sephardic melody of the Lecha Dodi prayer and in our opinion, Sephardic cuisine on Shabbat after the service is the best.  However, there is no synagogue that is more accepting of small children than our Ashkenazi Chabad synagogue in Netanya on Be’eri Street and for us that is what matters in this phase of our life more than any other consideration.

Our 3-year-old daughter Lilach is absolutely in love with cats.  Often, as we walk down the street, she crawls like a cat and makes cat noises.  In our home, she has a zillion stuffed cats and always gets anxious whenever one of them has to be cleaned because she spilled something on it.  Due to her cat obsession, sometimes in synagogue, she crawls around the sanctuary like a cat and makes cat noises.

One day, she even did it on the rabbi’s pulpit.  There, beside the rabbi, she behaved like a cat and then proceeded to sing Chanukkah songs.  Any other synagogue would have been outraged but at our Chabad synagogue, they found it hilarious and were totally ok with it.  In fact, all of the time at Chabad, there are small children who run around and make tons of noise.  Both Lilach and my one and a half year old son David really enjoy going to synagogue with their father for at Chabad, it is an opportunity for them not only to play with other children but also to be surrounded by Jewish spirituality at the same time. 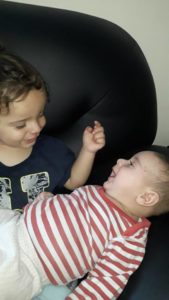 It is true that it is hard to go to synagogue after you have a newborn.  In recent months, I have been staying home because it is very hard to get to the women’s section on Shabbat with the baby carriage since there is no Shabbat elevator.  My one and a half year old and my three year old can go up the stairs themselves but my two and a half month year old cannot.  However, unlike Stoltz, I do not think that this detaches me from Judaism for I believe that our faith is much richer than synagogue services and of course, once baby Shlomi can go up the stairs, I will be returning to the synagogue.

On Shabbat, we always light both Shabbat candles and Havdalah candles.  Before I light Shabbat candles, I always put money in the tzedakah box and always give money to poor people that we see on the streets.  In addition, we always donate tzedakah money to various charities we support.  We also always have both a Friday night Kiddush and a Saturday morning Kiddush.  And we celebrate all of the holidays.

On top of that, every day of the week, I do not leave home without a hair covering.  In addition, I read children’s books to my children that educate them about Judaism and sing my babies songs with Jewish themes, both in English and Hebrew.  And for my job, I write numerous articles in support of the State of Israel.  I am also translating an entire memoir on the Holocaust from Hebrew to English and am currently doing research for my second book, which is on Moroccan Jewish women.   This is after I already published a book comparing how Palestinian female suicide bombers are covered in the American, Israeli and Arab media.

Therefore, I do not think that I am less attached to Judaism just because having a newborn makes it difficult for me to attend synagogue services.   If anything, having children has made me want to be more diligent with the mitzvoth for I know that children first and foremost learn by example and I want them to be educated to be decent good Jews.

And believe me, my children will be influenced more to be observant by hearing stories and saying the shema Israel before bedtime, listening to Jewish themed songs in English and Hebrew, by welcoming the Shabbat via putting on mommy’s make-up, trying on mommy’s hair-cover and seeing mommy light Shabbat candles plus giving tzedakah and by celebrating Shabbat/holidays together with grandma and grandpa alongside their aunts, uncles and cousins, and by running around and making noise in our neighborhood Ashkenazi Chabad synagogue than they ever would be by attending a synagogue where kids are not welcome.

Therefore, instead of being discouraged and moving away from Judaism, Stoltz should open up her mind and realize that there is a whole world of Judaism outside of her American non-Orthodox synagogue.  For me, Judaism is a way of life and it matters much more what mitzvoth you do during the week than whether or not you attended services at the end of the week.  And for me, every aspect of my daily life is surrounded by Judaism.  Inside our home, one can feel and breathe Judaism.  It is who we are and what we are about.  And for raising children, this is what matters at the end of the day and nothing else.

Rachel Avraham is an Israeli-American journalist who specializes in counter-terrorism issues, Middle Eastern affairs, the Israeli-Palestinian conflict, Iran, Turkey and radical Islam. She is presently working as a senior media research analyst at the Center for Near East Policy Research and as a correspondent for the Israel Resource News Agency. She has a masters degree in Middle Eastern Studies from Ben-Gurion University and a BA in Government and Politics from the University of Maryland at College Park. She is the author of "Women and Jihad: Debating Palestinian Female Suicide Bombings in the American, Israeli and Arab media." She is in the process of writing "Moroccan Jewish Women: The history and culture of a lost community."
View all posts by Rachel Avraham →