For three weeks, I have watched my grandson suffer. It isn’t easy to watch. He is in third grade; by all accounts, a student that excels in most subjects. He reads faster than I could ever hope to read; he is serious about his homework. And day by day, he falls behind other third graders. 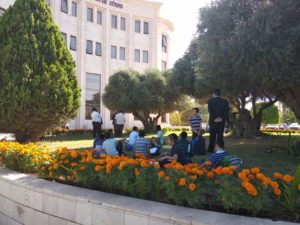 For part of the day, the only chair for my grandson chair is the grass in front of the mayor’s office; his desk is nothing but his legs. There is no board on which the teacher can write, and the mayor’s office just so happens to be watering the mayor’s precious flowers just at the time that the children are there.

What kind of mayor wages a war on children? On a grandson so precious, so smart, so young?

The Mayor refuses to meet the parents. He refuses all reasonable solutions. There are many. The children call out to the mayor as he quickly walks past them. He reminds them not to damage the flowers and doesn’t spend enough time to hear the child say quietly to his teacher, “but we are more important than flowers.”

What lessons do the the children learn? The mayor hates them, despises all that they represent. He doesn’t want them. He cares more for the flowers.

Benny Kashriel – has blocked me on Facebook. A move that is morally wrong, according to משרד מבקר המדינה ונציב תלונות הציבור

The Deputy Mayor ignores my posts (and the children). He wants to be our next mayor and yet he too ignores these children. Does that say what kind of mayor he would be? Are the flowers more important to him too?

Where is the State of Israel? Who will stop a mayor’s abuse of power? Aren’t children more important than flowers?

I watch as my grandson struggles with the knowledge that his school is different. Not because of what they learn but because they have a powerful man opposing them; a man determined to deny them what over one million other children have in Israel…the most basic of all rights a child has. He and his friends are being denied an education, the core curriculum being taught to every other child.