What is morally reprehensible is comparing the deaths of people who were murdered in their homes, with those who were killed as a result of their rioting and attacking security forces. Sarah Tuttle-Singer is the New Media Editor of the Times of Israel. She is a journalist – unless she doesn’t want to be called that, an unashamed leftist who should be ashamed.

She wants us to believe that she loves peace and wants justice and equality…unless, of course, you are a soldier or a settler. She is careful to put into quotes the “my side” and that is very honest of her…those quotes.

She is correct. Three Palestinians did die yesterday…and another today as well.

She is wrong. Three Israelis did not die yesterday…they were brutally murdered.

“Do you get it?” She asks. Honestly, I do get it…it is Sarah and others like her who do not get it and worse, are working very hard to make sure you don’t get it either. “A total of six people are now dead,” she continues. Well, she’s not bad with math but facts are what seems to escape her notice.

Then she attempts to tell you about the three Israelis. Note how she carefully points out that in addition to the grandfather, his two “adult children” were butchered. She points this out, lest you think they are younger and therefore you might be inclined to feel more sympathy. She says she is angry and “so so sad.”

But then, she quickly turns to the “other” side. She wants to know about the young men who died on the Palestinian side without once mentioning how they died or what they were doing when death “came upon them.” And, of course, to increase your sympathy, she wonders who is taking care of the mothers of these Arabs. The mother of the terrorist who murdered three Israelis has already come out announcing that she is proud of her son…is this one of the mothers that Sarah Tuttle-Singer worries about?

She doesn’t wonder about the mother of the “adult children” – because she is, it seems, another victim in the attack and is currently in the hospital fighting for her life. 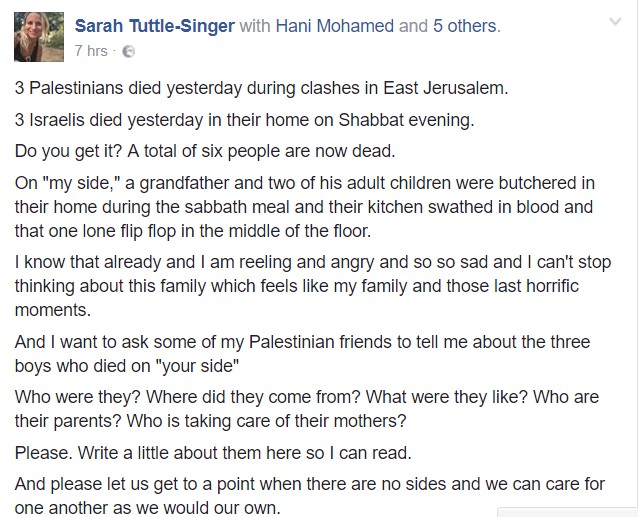 And then she delivers her most important message. She wants you to care as much about the dead Arabs as the murdered Jews. She wants to erase sides in this battle, coming dangerously close to ignoring 90% of the truth is this horrible conflict that we have been involved in since and before the founding of the State of Israel.

Yes, there are two sides to this conflict and yes, it is a bitter one. But no, there still is a difference between dying and being murdered; between being made the victim of a vicious attack and choosing to put yourself in the midst of a riot (if not one of the rioters).

Every single one of the Palestinian victims of the conflict’s violence (at least in the last few days) became a victim because they chose to go out into the violence that was started by their political leaders, incited by their religious leaders, usually fanned by their schools, and often encouraged by their parents, family and friends. The deaths of these young men were completely and entirely avoidable. All they had to do was NOT go to the rioting.

Every single one of the Jewish victims of the conflict (at least in the last few days) because a victim because…because of people like the ones in the previous paragraph. The deaths in this family were completely and entirely unavoidable – without a massive crack down and pouring more resources into limiting the mobility of hundreds of thousands of people – something people like Sarah Tuttle-Singer would no doubt bemoan and fight. 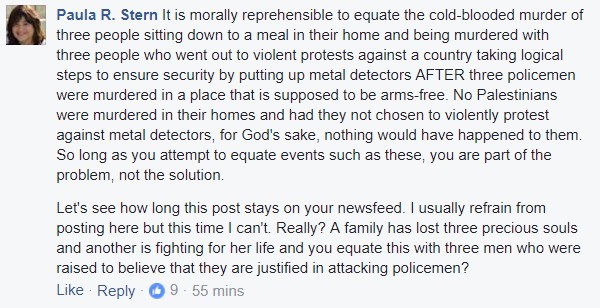 I would love to live in a world in which there are no sides – a perfect “Imagine” world in which everyone lives in peace. But, we will never accomplish that if we focus on the wrong “side” when trying to resolve the conflict.

The father of the Halamish/Never Tsuf would have you believe that his son murdered a 70-year-old grandfather and two of his children because of the “occupation.” Sadly, writers like Sarah Tuttle-Singer may well attempt to claim the same. The reality is that what is at fault here is not the location where some Jews live but rather the culture in which too many Arabs are raised.

Making hideous comparisons serves only to muddle the facts, deny the truth, and prolong the conflict. Only when we hold those who are truly responsible for this violence to the ramifications of their actions and words – only then do we have any chance at peace.

It isn’t the occupation.

It isn’t the metal detectors.

It isn’t the settlers.

It is extremist, fundamentalist Islam. It is Jihad. It is the Palestinian Authority. It is Hamas and yes, at the end of the day, it is Sarah Tuttle-Singer and others who attempt to divert you from realizing the terrible truths by creating illusion and inaccurate and reprehensible comparisons.