Linkedin
Tomorrow is my birthday. It is also the anniversary of Kristallnacht, the night of broken glass. Like many who came to religious observance on their own and not through family practice, my English birthday was all I had, all I knew…and even now, when I know I have a Hebrew birthday, it is still hard to think of any day other than November 9th as my birthday.
For as long as I can remember, I have known that November 9 is not a “normal” day. It is the day the world should have learned a lesson, and didn’t.

It is a day that should be remembered more than it is, for the warning we missed, for the hatred that still lives.

On November 9, 1938, on the orders of Hitler and the Nazis, Jewish homes, businesses, schools…synagogues were attacked. It became known as Kristallnacht – the night of broken glass. In hate, they raged against Jews and Jewish property. They gathered books and burned them.
History reports that over 90 Jews were murdered during the hours-long pogrom. In anger, you can read about the 267 synagogues that were destroyed all over Germany, Austria and Sudetenland. In addition, more than 7,000 businesses were either damaged or destroyed. Worse, about 30,000 Jewish men were arrested and sent to concentration camps…yes, even in 1938.
Perhaps the most telling part was that Journalists were there and sent back reports of what was happening. The Times of London reported it, as did other newspapers. 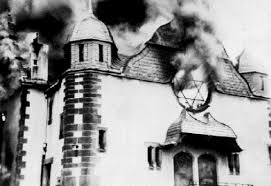 And though they say “only” 91 deaths can be firmly attributed to the day, hundreds of other suicides may be connected in the times that followed. More, it was perhaps on that night, in the hours when November 9 slowly turned into November 10th, that six million lives were lost to us. That fast, that final.
Some say that murder doesn’t happen in a vacuum; that there are causes that were missed. If this is true at the individual level, it is equally true at a societal level. Kristallnacht didn’t happen in a vacuum. Nor did the Holocaust just happen.
Yearly, as my birthday approaches, so does the weight of the day. It isn’t an easy birthday to have and sometimes it’s overwhelming to be told that you are your parents’ “answer to Hitler.”  Each challenges a child and the mother and grandmother that grew from that child…and that challenge. 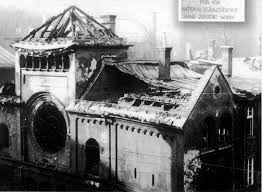 and the Holocaust? At first glance, the answer would be that I can’t. It was never a realistic possibility and yet, the truth is that in the seed of all of born after the Holocaust is the greatest answer.
Each baby born into the Jewish people carries not only the blessings but the burdens. At first, they are too little to know, then they are too little to understand. Later, awareness dawns and it becomes easier. The path to victory for my people could not be simpler.
For us, each day, each hour, each breath, each story, shouts our triumph. A quick Internet search suggests that there are tens of thousands of synagogues in the world today. Specifically, it mentions over 10,000 in Israel alone. And the Jewish population in Israel has climbed above 6 million.
Birthdays are funny things. As children, we welcome them with anticipation and excitement. But as we grow older and the years pass by, they become a reckoning. What have I done this year? What have I accomplished?
Sometimes, it’s better to focus on lifetime trends, where you are now in your career and in your relationships. Are you happy with who you are, where you are?
Mostly, these are internal conversations I have with myself and sometimes, as a religious Jew, with God. But sometimes, especially on my birthday, I have a special conversation with 6 million angels.
Each year, I think of my great grandmother, Raizel. And I think of my husband’s grandparents – all of them. Sometimes, I think of a little girl named Gavriella who never reached her 13th birthday, of Shmuel who died in the forest. Of Benyamin who was murdered shortly after his wedding. These and other names live on with my children and grandchildren.

Kristallnacht. It isn’t a birthday I would wish on anyone and yet I have always considered it an honor to call it mine.