Last night…I did something crazy…and I’m so glad. Really, it started when my youngest son told me about THE comet. See it now, or wait another 6,700 years. Well, with a choice like that, what options did I have. I told him I wanted to go and so we began to plan. Water, some food, blankets, folding chairs, long sleeves, shoes, cameras.

Okay, the list was longer. We invited a young man we adopted as a lone soldier (missing the chance to invite his brother, our original lone soldier…both considered brothers/sons within our family) and just went with the need to move, to go, to see. 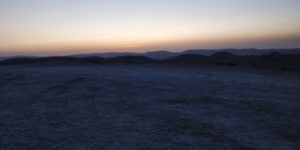 Long before sundown, long before the stars came out, we got in the car. Determinedly, we drove…first west, then south…and south and south and south. We passed the great energy tower near Beersheva and south we continued. We arrived at Mitzpe Ramon as the sun was setting. Didn’t like the options for seeing to the north and to the west and so we found another place. On the top of a mountain…as the final rays of the sun slowly left the sky. 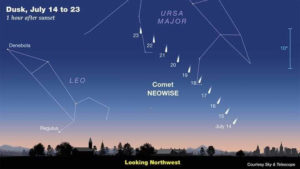 It got dark – and that’s the end of my pictures. Out came the real cameras. Lazily, I saw while David and Chaim began setting up tripods. For hours, they took pictures as I sat bundled in a sweatshirt and a hood. The big dipper, the milky way, the small dipper and falling stars.

That I will surely bless you, and I will greatly multiply your seed as the stars of the heavens and as the sand that is on the seashore, and your descendants will inherit the cities of their enemies.

And there…here…in the land of Avraham, I thought of the skies where I lived, how few stars I could see amid the lights of endless cities. And here above my head, for the first time, I understood the greatness of the blessing Hashem gave to my people. 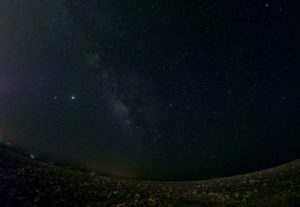 Last night, the stars couldn’t be counted. Sure, during 9 hours was a crazy thing to do. But, yet again, last night I knew. Blessed I am to live in the land of Avraham, to walk the paths and sit under the same stars.

In three hours, we saw the comet, the Milky Way, the Big Dipper, six falling stars, and a piece of heaven on a quiet mountain in Israel. And, to add perspective, in any other country, people would call that “mountain” a hilltop.

Exhausted and exhilarated, we returned home close to 2:00 in the morning. I ask my children if they remember the nights we pulled mattresses onto balconies and watched the heavens. Each time, there was a promise from scientists and astronomers that there would be a meteor shower and each time, we went outside…and the children quickly fell asleep. But it doesn’t matter because they remember going out, pulling the mattresses and the pillows and blankets.

Clocks and schedules and time management is great but sometimes, the best times of all are those when you throw things in a car and go…drive 3 hours to sit on a mountain for 3 hours to drive 3 hours back…oh, how I enjoyed the night, the “boys” who are now men. Long after I’m gone, ad 120, they’ll remember last night. Or maybe, if I’m blessed enough to do this again and again, maybe they’ll just remember how sometimes when you do the most insane crazy thing in the world, it feels like it was the sanest of all decisions.

God has truly blessed us…the stars of my family continue to multiply…three new stars this year…three sweet little girls. Life is such a blessing. Sometimes, you need to steal the time to stop, look up and let your heart fill with gratitude. My children and grandchildren have inherited the land of our enemies. The Assyrians, the Babylonians, the Canaanites, the Philistines, the Romans, the Greeks…they are all gone. And we are here, to stare alone into the heavens and the stars smile upon us, even when we are crazy.

Am Yisrael Chai – we are home…