And now to Nina Morris-Evans. It must be something about the day. First I write about Ariel Gold (I’ve already released my disgust there), and now I write about a Brit whose betrayal of Israel equally turns my stomach.

It isn’t often that I let my temper loose with my writing. I prefer the subtle to the loud…usually. But there are cases where the exception proves the rule. And how we deal with Nina Morris-Evans and all that she represents certainly justifies letting honesty reign. Nina Morris-Evans is a product of much that is wrong with Judaism in 2018.

Nina proudly writes that she lives in London and studied at the Camden School for Girls Sixth Form (whatever that means). She is young, and apparently not smart enough to admit that she has things to learn before she goes for the splash.

It’s clear that her ego and whatever intelligence she has are at war with each other – and her ego usually wins. She contradicts herself right and left – mainly left. She writes for the Times of Israel (that alone should tell you so much), and says she spent her gap year in “Israel Palestine.” 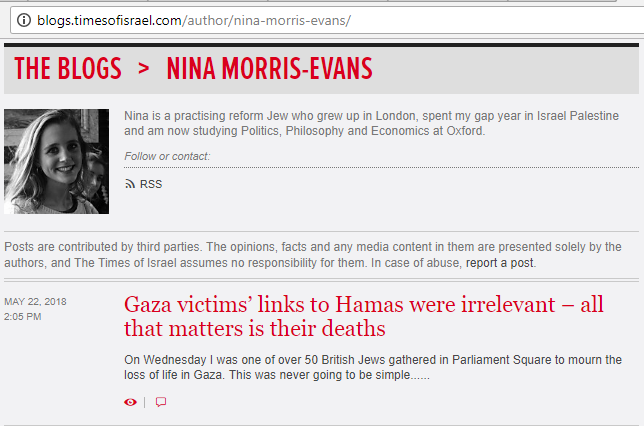 There is NO Palestine, Nina. No one stamped “Palestine” in your passport when you came to this country. There is no language, no culture, no cuisine with that name. If it is a nation, what is its capital – and don’t bother saying Jerusalem. That one was taken about 3,500 years ago.

But I guess abusing the name of my country isn’t any more offensive than saying Kaddish for those who attacked and tried to murder Israelis.

And, how is dear sweet Nina fighting the cruel occupation? Well, there was that moment when she stood proudly in London saying Kaddish for 50 Hamas terrorists. She did. Really. And, can you imagine…the occupation in her mind persists despite her amazing gesture!

Don’t ask her why then Prime Minister Ehud Barak offered nearly 100% of the “occupied” areas, and the Arabs decided to start an intifada rather than sign an agreement. Please, don’t ask Nina. You’ll just confuse her.

And if you waste your time telling Nina that she stupidly said kaddish for a bunch of Hamas operatives, she’ll answer (she did, really), that “who these people were or which group they are affiliated to – is an insignificant issue compared to the reality of their murder.” Yeah, Nina – they were terrorists “affiliated” with Hamas and they were “murdered” while attempting to MURDER Israelis.

Ah yes, I forgot, to Nina, Israel is the violent one. But don’t worry. Nina is quick to tell you that she “loves” us. Israel murdered people, but she still loves us anyway. Of course, if we don’t change to meet her demands, poor foolish Nina simply “cannot continue to love” Israel. How incredibly patient she is. Despite our failing her, because clearly, this must all be about her. She’ll still love us, only if we change to meet her requirements (what, is she 3 years old?). And, of course, we’re going to have to change our current “regime.” Regime…look at how she phrases things.

Sure, I’m sure to please Nina, we’re going to call new elections any day now…

And so, Nina came to Israel this summer to lead people around Israel, fight the occupation, and still have fun. But really, don’t worry. Below a picture of Nina and some of her touring buddies, she writes, “Who says you can’t fight the occupation and have fun?” There they are, a bunch of equally foolish young people, who will never understand this country because they’re views will be filtered through the prejudice of Nina’s anti-Israel views. But…really, it’s okay…because she’s still having fun.

Oh, and don’t ask if Nina is taking her charges to Sderot, Netivot, or Ashkelon. Whatever you do, don’t ask if she will go visit some of the 30,000 dunams of Israeli fields have been burned by Palestinian incendiary balloon-bombs. Or the kindergarten that was hit by a missile fired from Gaza. Don’t ask her if she will pay her respects to the Solomon family, the Meir family, the Ariel family, and countless other victims of Palestinian terrorism. Nina, the “diaspora Jew” is not deterred from her support of the Palestinian people by the suffering of her own people.

So, I have message for Nina, as she dares to think she is qualified to lead a tour group to Israel, a land she claims to love.

An Open Letter to Nina Morris-Evans

For two thousand years, the Jewish people dreamed of doing what you had the chance to do. Come walk on this holy and special land. Their dreams remained unfulfilled while you defile their memories with every step you take in this land.

What a joke you are. First to stand in London and pray for terrorists who violently stormed Israel’s borders, burned over 10,000 tires creating an environmental disaster, and now daily launch incendiary balloons that have burned thousands of acres of lovingly planted forests, orchards, and fields.

Do you really think you are that important that coming to Israel and opening your mouth means anything? You didn’t fight the occupation, you made yourself a laughing stock in London and now in Israel for thinking that you are that important. You aren’t. You’re just a girl, a foolish one at that.

The more you speak, the more you prove how little you really know about Israel. Your idiotic abuse of our religious rituals is an appalling testament to your utter stupidity.

Let me assure you, having lived in this wonderful country for almost 25 years, your ghetto mentality will not influence Israel; your suggestion that you are fighting anything is an insult to the young Jews in Israel who ARE fighting. They fight FOR this land (and not against it, as you do). They fight for peace, while your actions, if they had any impact at all, would just lead to war. And most of all, they fight against those who attack our people, while you stand beside the murderers, the terrorists, the assassins.

Despite the war being waged against us, I will tell you that Israel remains one of the most moral armies and people in the world. Shame on you for being so full of yourself…while ignoring Syria, the Congo, Sudan…and yes, Saudi Arabia, Yemen and others.

Innocent people are dying in Syria in the hundreds, and you protest  against Israel?

Brainless idiots who parade themselves around trying to gain attention mean nothing to an eternal nation that has survived every enemy to come our way. As we survived Amalek, Haman and Hitler, so too did we survive Korach, the spies who entered the land and lied, the kapos who served the Nazis, and people like Stella Kubler. One could argue that Kubler, at least, betrayed her people to save her life, worthless and miserable though it was.

And you, Nina, what excuse do you give for mourning more for our enemies than our own children? Never mind, don’t answer. I have found few idiots ever recuperate from being what they are.