Last night, the candle I lit after my father’s funeral finally burned down. Grief is an unpredictable thing. Twice now, I’ve known that my responses are based more on grief than on logic. The first time was when discussing my father’s tombstone and what would be written there. Does it really matter? Probably not and yet I found that I did care. That I wanted some things more strongly than I expected and didn’t want others. 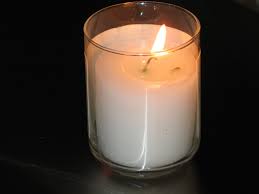 Today, a company called to register people for a conference. They called months ago and asked for an invoice. Then asked me to change it. A while later, they asked for another and complained about the price until I showed them that I had billed them even less than they were demanding. Then, a few weeks later, one of the attendees decided he couldn’t come and so I was asked to generate yet another invoice.

When they got around to paying, they mailed the check for the larger amount and so asked me to call them when it was received. Their new plan was to pay by bank transfer but they wanted me to confirm that I’d gotten the check. That I wouldn’t use it. And then that I agreed to let them cancel it. Today, they called to ask me to write them a note that the newest invoice was the newest invoice and that they couldn’t pay until I did.

And that was when I lost it. I told them about my father and they apologized. More, I told them that no company has given us so much work. Not enough? Additionally, I asked, isn’t it obvious if I send a new invoice with the same number but a later date that the first one is meaningless? He agreed and asked me to send the email anyway.

Basically, the point here isn’t me losing it so much as it is a lesson in grief. You can’t contain it in a few days and you can’t control it. It comes when it will, as it will.

The candle going out doesn’t change the reality and it doesn’t end the grief. In theory, I’ve heard of the stages of grief – of the tears and the sadness, sometimes anger, disbelief and more. Living through the theory is a very different experience. Each event is a milestone and the candle going out seems to be another. Why write about it? Aside from the fact that this is what I do and how I cope, I’m hoping it will help others.

Did you mourn the candle going out?