Recently, I started painting a picture that I found on the internet. It’s coming along quite nicely and though it isn’t finished yet, I felt a desire to post it. Amazingly enough, the painting got more responses than I expected (166 reactions and almost 60 comments). 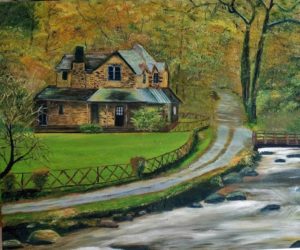 For many people, this would seem like an isolated space. Pristine. Deserted. Peaceful. Green and filled with growth. More than one person looked and said they wanted to live there. In the dream world in which we seek quiet and peace, this does look like heaven. But is it really?

One friend joked that this was the house I would have lived in had I not chosen to move to Israel more than twenty-five years ago. She’s not far off. When we did live there, our home was just over a small bridge and down a dead-end street. While we did have neighbors on three sides, behind us was state-owned woods with a small creek running through it. Not quite as big as the one in the picture, but not much smaller either.

No, the house wasn’t as nice as this one, but it as certainly as old and it did have a front and back porch. But beyond the house itself is the message it offers. Alone. Solitary. Private. Yes, it isn’t the first message and that was the reason I chose to paint the picture in the first place. Clearly, my first thoughts centered around the quiet, the peaceful, the beautiful.

But as I painted it, moving my eyes from the picture to the painting, my mind kept working. Again and again, my mind shifted to the second set of descriptive words. Private. Alone. Solitary.

Daily, Jews gather to pray in a minyan, a community. Tomorrow, we will celebrate the holiday of Purim. It is an “in your face” holiday in which we gather to listen to the story of community. Unlike most places, we don’t raise our children to fear strangers. I grew up with “don’t talk to strangers.” Here, there are no strangers.

Yesterday in the supermarket, as I purchased bags of flour, a young man looked at me and said, “you can tell me, which breadcrumbs should I buy?” And so the conversation began. Of course, I asked him what he will do with the breadcrumbs. And, of course, I had to share with him that mostly, I make my own breadcrumbs from the left over challah bread I make for Shabbat each week. Naturally, he thought that was brilliant and asked why he didn’t think of using the leftovers. I then pointed to two bags and suggested he buy one of each and mix them and add spices.

As well, I should add that this young man was not religious. Why is that significant? It isn’t at all and that’s the point. Without hesitation, he approached an obviously religious woman to ask my advice and equally without hesitation, I answered. Conversation. The polar opposite of this house. We are never alone so long as we stand next to anyone in Israel. Conversations between strangers are completely normal, even expected.

No, this beautiful house in the woods was never the house I would have had because Jews need community and this house, like the house we owned when we DID live in the States, was too far from others. If I were rich, maybe I’d buy something like this as a get-away but my life was always meant to be here in Israel and within the community and I gave up nothing and gained everything by living here.

This house is a beautiful reminder of another world that I chose not to live in and three minutes breathing Israeli air (and that’s an exaggeration by at least two minutes), reminds me of how grateful I am that I can call Israel my home.