Israel has so many facets, so many angles that are needed to even attempt to explain what it is like to live here. There is a rhythm to this land, a smell, a feeling that is so unique. For us, the year doesn’t begin on January 1. We are aware that this is so for the rest of the world and so our financial world follows suit. But really, the heart and soul of Israel starts its year sometime in September or October. It runs by the lunar year – Rosh Hashanah. It is really only during the summer months of July and August that we seem to remember that there’s a whole world out there that doesn’t mark the calendar by Nisan, Tishrei, Sivan and Kislev.

The new year begins in Tishrei and this marks a time when we focus on family more than work; on holidays more than school. There follows about a month in which nearly everything is measured by the words “acharei hachagim” – after the holidays. It is nearly a month of holidays – averaging one per week. Each has a religious element, and a cultural and social one. Finally, by late September (and sometimes late October), we are finished and ready to get back to work, back to reality.

And yet, just a few months later, we are back to the holiday of Hanukkah. The year continues according to the lunar/Jewish calendar in many ways. We celebrate Tu B’Shevat (the new year of the trees), we mark fast days, experience the joy of Purim, and slip into the agony and the wonder of Passover. We continue through the counting of the Omer into the holiday of Shavuot and then, suddenly, we switch to the solar calendar for two months. 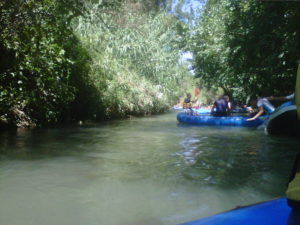 The end of June brings the coming of the summer vacation. In Hebrew, we call this the “chofesh hagadol” – the “great” or “big” vacation. For younger children, June 30 means freedom. They run out of the schools as if they will be free forever. All that they know, is that ahead of them are the months of July and August.

What is unique about Israel and the summer months is that it isn’t just the kids. July brings the entire nation to a suddenly slow pace and August is even worse. There’s pretty much nothing you can accomplish in Israel in August without tripping over someone who has gone on vacation.

Mostly, the north is the intended destination for most. By now, it is nearly impossible to find a place to stay and thousands camp over the summer. Mainly, it is the teenagers that hog the shores of the Sea of Galilee. Meanwhile, it is families that fill canoes and kayaks and float down the Jordan River. The cities are full, the cafes and malls bursting with those who want to get out of the heat and enjoy the air conditioning over a relaxing cup of coffee.

Oh yes, that’s where Israel is right now. Slipping from July into August, we are grinding to a halt, surrendering to the heat. Clearly, vacation is on our minds and September and the holidays is a million miles (and days) away. Happy Summer, Israel!