The palestinians will have you believe that installing metal detectors at the Temple Mount has led to an outbreak of violence. They’ll say it caused “outrage” in the Muslim world. They’ll say that Muslims were “insulted” and they’ll say that Israel is attacking Islam. They are concerned about the “Judaization” of Jerusalem, which is kind of ironic considering Jerusalem was Jewish about 1600 years before Islam was even invented.

But, as with all things that come from the palestinian world and the invented country of Jordan, it’s just another lie and just another excuse for violence, something they do all too well.

In the Land of Israel, there is a long history of Arab violence against Jews.

In 1834, a Muslim cleric in Safed called Muhammad Damoor, whipped up the locals by telling them that “true believers would rise up in just wrath against the Jews, and despoil them of their gold and their silver and their jewels.”

This action, not much different to what local palestinian clerics do now, incited the crowds to violence and led to a month long pogrom in Safed. Many Jews were beaten to death and raped and their property destroyed.  They were forced to flee to the surrounding country areas in an attempt to find safety. Synagogues were ransacked and hundreds of Torah scrolls destroyed. The pogrom only stopped when Lebanese Druze troops entered the city and stopped the riots, with many of the mob leaders executed.

Interestingly, there were no security checks for the mobs to use then as an excuse.

Going further ahead in time, there were recorded pogroms and attacks against Jews in Jaffa (1876), Jerusalem (1847, 1870 and 1895) and many other places in the Arab world – too many to list in one article.

Once again, there were also no security checks then to list as an excuse.

In April 1920, after the Nebi Musa holiday holidays, he incited the crowds against the Jews, whipping them up into a blood frenzy that results in the deaths of 5 Jews and hundreds injured. 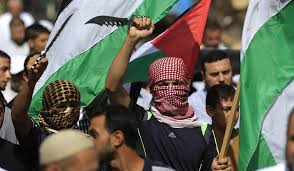 checks in place to use as an excuse.

A few years later in 1929, in what become known as the Palestine riots, he fired up the crowds warning them that the Al-Aksa mosque was in danger.

This lead to a week of mass riots and pogroms against the Jews which ended in the murder of 133 Jews, including the massacre of the Hebron Jewish community.

And lo and behold, no security checks or gates in sight.

Today, the palestinians are once again conning the world into believing that security gates were the instigator in unleashing violence. Of course, this isn’t remotely true and is just another excuse in a whole litany of excuses to unleash violence against an innocent population.

And if there was any doubt, once Israel removed all the security apparatus that was set up, it still didn’t quell the violence in the slightest.

It was never about anything else, but an intolerant bunch of thugs trying to control the most holy site in the world, not because it is holy to them, but precisely because it’s holy to the Jews.

Israel is in a difficult position, faced against opposition in not only the rabid anti-Semitic Arab world, but most of the ignorant non Arab world who continually demand from Israel to maintain the “status quo,” a status that actually endorses religious discrimination and intolerance and prevents Jews from praying in the holiest place in their own country. To a so-called enlightened world, the status quo should be an outrage that should be removed, rather than an idyllic standard that should be maintained. It will take courage to re-institute justice and fairness in this place that has become a symbol of injustice and unfairness.

The Temple Mount is the holiest place in the Jewish world that belongs under the management of the Jewish state, and in the end its future won’t be decided by the metal of security gates, but rather by the mettle of Israeli leaders.