Are Holocaust jokes acceptable? Well, according to a conversation between “two blokes,” apparently they are. On the radio. They speak of a dog that has been taught a new trick; one that angers many. Angry enough, one man chose to file a complaint against the dog owner. The new trick? To give a Nazi salute. The trigger that gets the dog to salute? The words, “Gas the Jews.” Two men sit in front of their microphones and the appropriateness of “Holocaust jokes”? That’s a contradiction in terms, if I ever heard one. The two men are David Baddiel and Ricky Gervais. Let’s be honest. We never heard of either of them, have you? Who is the host (both?) and who is the guest? Who cares?. 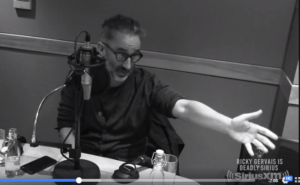 They are talking about blokes and apparently one idiot bloke taught his dog to give a Nazi salute and the trigger is “Gas the Jews.” Apparently, according to one of these clowns, a “Jewish bloke” took the idiot bloke to court. In defense of the idiot bloke, said David or Ricky (don’t know which and don’t care), said that the idiot bloke explains that his girlfriend thought their dog was cute…not matter what the dog did. So, his goal was to teach the dog something that was hugely offensive and she still thought the dog was cute.

In the rather inane discussion of the idiot bloke and the pug, the conversation included a comment that it is okay to joke about the Holocaust. And therein lies the problem. You see, when you build something on a faulty foundation, all that you build is weak. This is true of a building; it is true of an argument.

This is funny? Somehow we’re missing the humor…

David Baddiel and I discussing the “Nazi Saluting Pug” a few weeks ago on my Sirius XM show.