I want to thank the international community, the UN, Bernie Sanders, France, our very own Meretz party, and the bulk of my gratitude, I’d like to dedicate to our friends, the people who call themselves Palestinians.

Self doubt, it’s a dangerous thing. When all day, every day, all you hear, all that is drilled into your brain, is that Israel is an aggressor, a savage apartheid country that brutally murders Palestinian women and children whenever they can, eventually you start to doubt yourself. When everyone else thinks you’re crazy and you think you’re sane, you might very well be crazy. 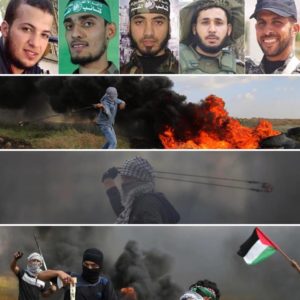 And so, that self doubt, it starts seeping in. Maybe we really aren’t doing everything we can for peace. Maybe there really are millions of Palestinians who want peace and we are the real obstacle here. Who knows? Maybe these homes and communities we build that are full of beautiful, intelligent, and ideological people, maybe they are are indeed illegal settlements, and should be evacuated. Who knows? Everyone else thinks it. Maybe I’m the crazy one.
Then Friday happened.
Objective undeniable truths. Tens of thousands of violent protestors egged on by a globally recognized terrorist organization try to invade the territory and breach the official borders of a sovereign nation. Zero opinion. All facts.

The only free country in an entire region does exactly what any other country would do in the same situation. No, sorry, any other country would have acted significantly more violently. Israel protected its borders and killed known terrorists. This is all documented clearly. The identities of those nice gentlemen are explicitly documented. They are no more. Again, facts. The world is now a better place with over ten dead terrorists.

And yet, in the face of cold hard facts, the world condemns the good guy. Obsession. Across the board, the international community gets up in arms to call out the the side of justice and self defense. Consensus.

These calls from the UN, France, Sanders, and the rest of the clowns in the circus abolish any self doubt I may have had.

We are right. They are all insane. Wait. Not so fast. Insane isn’t the right word. That would let them off the hook. History won’t be so forgiving. They are not insane. They are good old fashioned Jew haters.

Yes, I realize some are Jews. That is ok. We’ve always been our own worst enemy. We are sometimes too good for our own good. Too merciful. And we know what happens to those who pity the evil. And that is what has happened. They have become evil.

So no, it’s not me. It’s not you. We are the sane ones and no UN resolution will change that, no matter how many nations support it.

So today, we are confident in our way once again. The way of logic, reason, the love of life, and the path of building the future. That is us!

Our enemies embrace death and destruction. We embrace life and innovation. It’s pretty clear to me who will remain standing last. Look at history. Somehow, after all these generations, and all these cruel enemies, we are still here, something you can’t say for the rest of them.

Dear world, thanks for reassuring me and making me more confident than ever.