Haaretz, the left-leaning, sorry, make that tumbling over, newspaper founded in 1919 is notorious for blatantly biased coverage of traditional Judaism, normative Zionism and anything that does not promote an extreme progressive, humanitarian and liberal outlook.

Here are CAMERA’s examples of what they found wrong in the pages and website of Haaretz.

The paper, admittedly, is interesting, has a first class economics section, its literary supplement is on a high standard and everyone who thinks or wants to be anyone of power and status reads it. Of course, there really aren’t that many Israelis who subscribe. Its main clout is in its English-language edition which has hooked up with The Forward and the New York Times.

To be fair, it once interviewed me. One of its stalwarts, Rogel Alpher, had me on his radio program and described me as “Yisrael Medad is a high-profile right-wing journalist and blogger.” I am on friendly terms with its owner and publisher, Amos Schocken, for who I served as a guide to Tel Shiloh where I live. Eli Pollak and I have published about its shortcomings in our Media Comment column at the Jerusalem Post, like here.

Its selling pitch is: “for the people who think”. It prides itself as serving and highlighting the “enlightened” public who are not fascists, racists, apartheidists and what not. It is solidly anti-government. So much so, that Menachem Begin once quipped, “the last time Haaretz published a pro-government editorial was when the British Mandate still existed.

On Thursday, April 26, the news leaked out of the tragedy of the hikers at Nahal Tzafit, south-west of the Dead Sea. Early information noted that the students were from a pre-army academy, or Mechina Kdam-Tzvait. As it happens, these “gap year’ educational institutions were initiated by religious Zionist circles to strengthen those in Jewish knowledge who had no intention of continuing their higher Bible and Talmudic studies and who were very serious of not only becoming a soldier in the IDF but becoming officers.

The First Report site run by Evgeny Zarovinsky noticed that since the specific academy had not been identified, many who were leaving comments at the Hebrew web site of the newspaper had assumed the swept-away youngsters were either religious or, “worse”, residents of Jewish communities in Judea and Samaria.

He was astonished and pained at their content.
He posted a screenshot. 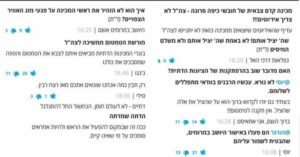 A sample of what “thinking people” think:

Nevertheless, someone felt “at home” at Haaretz and presumed he was “following the line”. And that he could post such trash with little impunity. This type of thinking is not thoughtful. It is hateful ranting.

And it is assisted by the opinions of its columnists Gideon Levy, Amira Hass, Bradley Burton, Chemi Shalev, Uri Misgav and Rogel Alpher. How unfortunate for us. 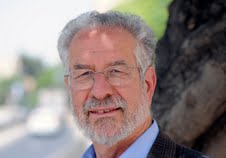 Yisrael Medad has been a blogger since 2004, writes with Eli Pollak a media critique column at the Jerusalem Post and is a Research Fellow at the Menachem Begin Heritage Center in Jerusalem. He lives in Shiloh.