My name is Hodaya Nechamam Asulin. I am 21 years old. I used to live in Mevo Horon with my mother Michal, my father Eliyahu, and my six brothers and sisters. My mother says I am, “exceptionally sensitive,” as well as, “graceful and modest.” 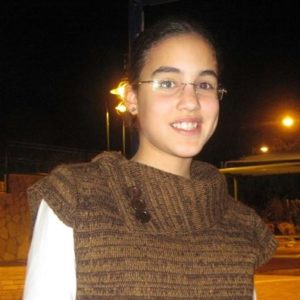 On March 23, 2011, when I was just 14 years old, I was waiting for the bus to take me home in the afternoon, right outside the Jerusalem International Convention Center. Suddenly an explosion ripped through the air. Hussein Ali Qawasmeh, a 37 year old Palestinian terrorist from the West Bank, decided to commit suicide. He exploded a bomb packed with shrapnel behind the bus stop where I was standing.

A woman was killed, and another 68 people were injured – myself included. I was rushed to the hospital but suffered significant brain damage that left me in coma. For six years, I was in a coma at the Hadassah Ein Kerem Hospital in Jerusalem. Until November 22, 2017, when I died.

My name is Hodaya Nechama. I am 21 years old. And I am one of #TheFallenFaces.